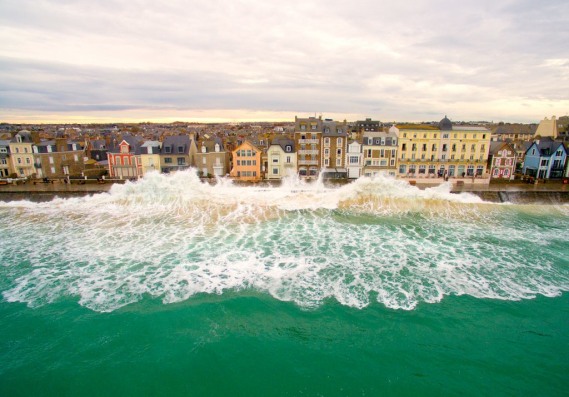 Contrary to popular belief, drones aren’t primarily used for deliveries (yet) or spying on your neighbors (that’s illegal). They’re mostly used for photography–and they’ve got their own version of Instagram to boot.

It’s called Dronestagram, and since the website was started in 2013 it’s become a hub for drone photographers and the thousands who flock to the site to check out their work. And now, the best of Dronestagram has been immortalized in a new book called Dronescapes, edited by longtime journalism photo editor Ayperi Karabuda Ecer.

The book catalogs the current landscape of drone photography, from “dronies” (drone enthusiasts’ code for selfies taken by drone) to more traditional aerial landscape shots, to photographs of monuments, cities, animals, sporting events, and even weddings–all seen from above. Ecer also profiles some of the field’s more prominent photographers, including the mother-daughter-duo Kim and Makayla Wheeler, who have been using drones since 2013 to take photographs, primarily of the landscape and wildlife around their home in Florida.But what makes a drone photograph particularly compelling? “A really good drone photograph is one you can only shoot with a drone,” Ecer says. Some of Dronescapes‘s photos of nature in particular could never have been shot with a human present. One striking closeup image of an eagle was captured because the eagle started chasing the drone, thinking it was a fellow eagle. In another shot taken in New Zealand, hundreds of sheep waiting to be shorn stare directly into the camera.

Part of the appeal of drone photography, Ecer explains, is that it has made aerial photography accessible to a much broader number of people. Before drones, you needed a lot of high-tech equipment–and a helicopter. “Now practically anyone can shoot from the sky,” Ecer says. “The sky has become a new territory for photography.”

In Dronescapes, photographers capture well-known monuments, like the Statue of Liberty or Rio’s Christ the Redeemer, from directly atop the statues. Even office buildings take on new depth when captured in an unexpected way. Other photographers look for patterns they can spot from above, turning roads, fields, docks, and even junkyards into almost abstract pieces of art. The book also highlights some of the photographers using drones to document climate change and environmental disasters–a topic often explored by artists working with satellite images.

Perhaps the best photos in the book though, are the so-called “dronies.” In a section entitled “Drones Are Us,” Ecer gathers photographs of people who are really excited about their new photography toy. In one, a man lies down in a big grassy field, drone controller in hand. In another aerial shot, the photographer stands on the beach, casting a long shadow across the sand. In a third, the photographer stands atop a hill, hands triumphantly cast upward. “They’re like the anti-selfie,” Ecer says. “In drone photography it’s actually about putting the individual in scale with the environment. The individual is always tiny tiny, and then you have these big mountains or big city around.”

On par with the dronies are the wedding photographs–which aren’t just replicas of classic shots of the bride and groom from above. In one, a bride floats in the middle of a shallow sea, her groom standing next to her. In another, the bride and her friends mimic the throwing of the bouquet–all while lying on the ground.

Ecer included a section on this because she was fascinated with how the technology is changing people’s perceptions of portraits. “You always have this idea of family images in albums and your family watching you from a picture on the piano or something,” she says. “But now you have people looking up into the sky. It changes the whole feeling about what intimacy is.”

Despite the rise of the art form, privacy remains a hot topic when it comes to drones. It’s regulated differently in every country, but Ecer say the general trend is toward allowing them, rather than clamping down on privacy. As drones continue to invade the skies, it’s worth remembering how they can be an instrument for art and beauty, not just surveillance.