Top 10 Countries You Need To Visit

There are some parts of the world that, once visited, get into your heart and won’t go. For me, India is such a place. – Keith Bellows, the late editor-in-chief of National Geographic Traveller
Much has changed since India achieved independence seventy years ago; the economic revolution has introduced new wealth into booming cities, while technology continues to spread into even the most unlikely corners of the country.
Yet as urban India races towards the future at breakneck pace, vast swathes of the Subcontinent still remain untrodden by travellers. Little-explored regions such as Gujarat, Arunachal Pradesh – or even the far-flung Andaman Islands – offer flavours and cultures quite different to more touristed states such as Rajasthan, Kerala or Goa.

Travelling to India in 2017 has also become much easier. The launch of e-Tourist Visas has cut down the red tape for citizens of over 150 countries, and tax exemption on homestays has provided new opportunities for visitors to immerse themselves in Indian life.

Wildlife, whisky and a wonderfully warm welcome make Scotland a perennially popular destination, but in 2017 there are even more reasons to visit.Chief among the new developments is the North Coast 500, a rugged road-trip route through the Highlands, past isolated bothies, white-sand beaches and top-notch surf spots.
Off the road, Scotland’s food and drink scene is rapidly evolving; Glasgow is one of the best places to head for culinary experimentation, while you’ll find bottles from Scottish microbreweries at even the most remote pubs.If you’re the type to eschew beer for butterbeer, the 20th anniversary of the first Harry Potter book makes a great excuse for a trip. Hop on the Jacobite steam train (also known as the Hogwarts Express) for a magical journey over mountains and freshwater lochs, hang out in JK Rowling’s charming Edinburgh haunts, or hike out to the site of Hagrid’s hut in awe-inspiring Glen Coe.
Getting here is simple, too, with plenty of cheap flights from Europe and refurbished sleeper trains from England.
Whether driven by a passion for spectacular wilderness or a music scene that birthed today’s chart-topping superstars, a desire to explore Canada is taking hold of travellers around the globe.In 2017, the world’s second largest country celebrates its 150th anniversary, with a host of events planned throughout the year. But Canada was inhabited for millennia before the confederation of its colonial states, and the emergence of Aboriginal tourism marks one of the most significant and exciting developments for visitors to date.
This year, discover Canada with the people who’ve stewarded the country’s incredibly biodiverse lands and waters for countless generations. Horseback camping excursions along forgotten Rocky Mountains trails with Alberta’s Métis, snowmobiling alongside Inuvialuit reindeer herders or navigating the Great Bear Rainforest alongside the Kitasoo and Xai’xais First Nations are just a few of the possibilities.

Dubbed the “pearl of Africa” by Winston Churchill in 1908, the small but incredibly diverse nation of Uganda remains a fascinating yet vastly underexplored destination.The country’s commitment to heavy investment in its tourism infrastructure looks set to change this, though, and in 2017 expect Uganda to vie with Kenya and Tanzania for international visitors, drawing more and more travellers with its astonishing wildlife.

Find everything from three-horned chameleons to the iconic mountain gorilla – now more accessible than ever thanks to a recent gorilla-tracking initiative that allows trekkers to spend more time in the presence of these beautiful creatures.Where else can you canoe past crocodiles on the Nile, track gorillas in dense jungles, soak in hot springs, scale snowy mountain peaks or visit a traditional Batwa village – all within a single day’s journey? Only in Uganda. 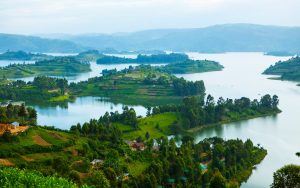 With annual visitor numbers barely reaching a million, it’s safe to say the world has yet to discover Bolivia. Make 2017 the year you explore one of South America’s most overlooked destinations.

Trekking through the astounding biodiversity of the Bolivian Amazon, blazing through the surreal salt flats of Salar de Uyuni or climbing craggy mountains blanketed in snow – all these unforgettable experiences come crowdless and remarkably cheap.October also marks fifty years since the death of national hero Che Guevara, whose last steps can be retraced along the “Che Trail”.But if there’s one thing not to miss in 2017, it’s the rising tide of La Paz’s wrestling Cholitas.

This is a movement through which Aboriginal women have taken back a once derogatory term in the name of self-empowerment, battling against gender roles, discrimination and male machismo one thespian match at a time.While on the whole you’ll find a renewed sense of vigour driven by growing national prosperity, keep in mind that Bolivia has faced some serious droughts as of late. It’s important to travel in as sustainable a way as possible, and there’s a plethora of ecofriendly initiatives to help minimize your footprint.

By Matthew Straubmuller on Flickr (CC BY 2.0)
The largest and least-visited nation in Central America begs to be explored in 2017. While broadening flight routes are opening Nicaragua up to the world, for now, the country’s gorgeous colonial cities and picture-perfect beaches remain some of the most unspoiled in the region.For adventure travellers, Nicaragua offers the best of Central America for a fraction of the costs you’ll find in neighbouring countries. Sloth-spotting in dense rainforests, epic surfing trips, remote eco retreats and excursions to nineteen different volcanoes are just a few of the intrepid activities you’ll find in “Costa Rica without the crowds”.Until now, many visitors have been kept at bay by Nicaragua’s reputation as dangerous – something that is simply no longer valid. The same travel precautions should be taken here as elsewhere in Central and South America, but you’ll generally find Nicaraguans to be overwhelmingly kind, hospitable and welcoming.

Portugal is on the up, finally surfacing after five years of deep economic crisis. Tourism in the countryside and on the coast is booming, while the cities are becoming increasingly cosmopolitan thanks to thriving creative industries, world-class restaurants and cutting-edge art scenes.
Central to this transformation is Lisbon, home to a host of forward-thinking startups and a growing bohemian vibe. Come for the liberatingly low rents and hotel costs, gorgeous historic neighbourhoods, never-ending nightlife and among the best year-round weather in Europe.In the north, laidback Porto is proudly embracing its own identity, too, both as a gritty cultural hub and the country’s food-and-drink capital.Beyond the cities, in much of Portugal an old-world pace of life still pervades.
Along the country’s long swathes of coastline you’ll find everything from quaint fishing towns, all of which are perennially cheap, to the balmy beaches and wildlife reserves of the Algarve.
Finland has a reputation as something of an enigma within Europe – a mix of Nordic, Russian, Western and indigenous cultures that’s at once laconic, perplexing and charming.In 2017 the country celebrates one hundred years of independence, and this isn’t a centenary to skip. Elaborate exhibitions showcasing Finnish thought, art and design will pay homage to the country’s place as a creative powerhouse and world leader in the fields of education and human rights.

This year will also see a range of Nordic sporting competitions, the world’s largest snow restaurant, several music festivals and the grand opening of Finland’s fortieth national park, Hossa, where brushing shoulders with brown bears is commonplace. And no trip would be complete without kicking back in a piping hot sauna such as Helsinki’s Löyly, a masterpiece of contemporary wooden architecture overlooking the Baltic Sea.
Namibia only gained independence in 1990, making it one of the last African countries to do so. Though development has taken time, Namibia’s tourism industry is finally taking flight – and there’s never been a better time to go.
Budding travel photographers will find endless inspiration here, whether skydiving over the planet’s most ancient desert, high-intensity hiking in Fish River Canyon, hot air ballooning over the shimmering Kalahari or on safari tracking free-roaming lions, black rhinos and elephants.Venture to the country’s Skeleton Coast and you’ll find Atlantic waves crashing against the edge of the Namib Desert and washed-up shipwrecks scattered like surrealist sculptures stranded in sand.
Further inland, the sun-blackened trees of Dead Vlei jut awkwardly from the bright white ground, like the remains of some post-apocalyptic Earth.

Pixabay / CC0
Taiwan is only just beginning to garner the attention it has always deserved. Cosmopolitan Taipei was named World Design Capital last year, highlighting its pioneering creative scene, new wave cafés and all-round sophisticated city life, while the country’s cuisine and night markets remain world renowned.China’s influence is obvious, of course, and the cultural remnants of the island’s past occupation by both Japanese and American forces are still discernible. But as the only democracy in the Chinese-speaking world, Taiwan has a unique geography, mentality and identity.
High-speed trains will whizz you out of cities to steamy forests and jagged mountains. Non-stop nightlife is never far from bubbling hot springs and sunny sub-tropical shores. Cutting-edge modern architecture sits side-by-side with ancient temples.Many travellers are only just waking up to all this island has to offer: get here before everyone else does.
Source: https://www.roughguides.com/best-places/2017/top-10-countries/.
Tags:amazon

Others are reading:AppleunlockTmc appAppleunlockerVolte sip message sms interception and eavesdroppingSpymaster proHow to montore actvity on your routerNu votMaganin karatuGhostctrl downloadGhostctrl apk
We use cookies on our website to give you the most relevant experience by remembering your preferences and repeat visits. By clicking “Accept”, you consent to the use of ALL the cookies.
Do not sell my personal information.
SettingsAccept
Privacy & Cookies Policy